5-Star Review of "Until the Harvest"

Review of Until the Harvest 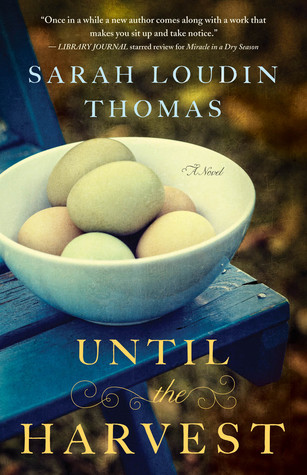 "Once in a while a new author...makes you sit up and take notice."--"Library Journal"
When a family tragedy derails Henry Phillips's college studies, he's left unmoored and feeling abandoned. Although Henry tries to find escape in bad company, the only things that can tamp down his anger and grief are the family farm, his fiddle, and sweet but unusual pre-teen Mayfair Hoffman. Unfortunately, Mayfair's older sister, Margaret, with the freckles and cute, turned-up nose, has the opposite effect. Worse, she's his grandmother's housekeeper and helper, so she's always around and ready to push his buttons. At first he thinks she doesn't care about his loss, before beginning to understand she's facing her own struggles. Mayfair's health and unique gift sit at the heart of those worries, and Henry and Margaret soon find themselves relying on each other as both Henry's future and Mayfair's life are put at risk.

MY REVIEW:   "Closing the bedroom door, Margaret walked into the family room and found Henry standing with his head down and shoulders slumped.   She'd heard he was in from college but hadn't seen him.  Normally, she wouldn't be seeing him now.   Emily always insisted on doing for herself over holidays so Margaret could be with her family.   Not that she much enjoyed being with her family, except, of course, with Mayfair.  Her sweet little sister was always a bright spot."
I was born in 1961 and so I was a young teenager when this story was set in Wise, West Virginia in 1975.   I am a native Virginian and so West Virginia is of course our neighbor to the west.   Those two things....the place and the year stirred enough memory within me that it made me want to read this novel.   My husband got married for the first time in 1975 and was a young man in the Air Force.   Many issues the main male character, Henry, encountered made me think of Harry and wonder if he experienced any similar feelings or occurences.  I love historical romance novels also and that created another reason for me to desire to read and review this book.
I was not disappointed.   The book had a slow pace to it but it was fitting with the times and the things that were going on in the characters' lives so I made me want to keep on reading....not what you generally think of when you hear a book has a "slow pace".   Margaret does not seem to recognize her own beauty and sees only flaws and I felt this way a great deal of the time myself....especially during the late 70's.   I grew up in a small rural town that was also known for its slow pace as well.   It all just kind of "took me back in time" to recall some similar situations for myself, family members and friends as I read.
During this time period, many fathers also held the view that a career in one of the arts would not create enough income to support a family as Henry's father expressed to him.   Can Henry follow his heart and his dreams or will he need to rethink his plans?   Is Henry's father correct in his assumptions?   Can a small town be the place to follow one's dreams or must one live in a large city for that?  Read Until the Harvest and find the answers to these and other questions that are sure to crop up.
I rate this book 5 stars and would love to recommend it to fellow readers.
I received a kindle version of this book from netgalley in exchange for my honest review.  All opinions expressed are my own.

I’m a Christian, wife, fundraiser and writer living near Asheville, NC. I grew up on a 100-acre farm in French Creek, WV. I used to say “rural WV,” but realized that’s largely redundant. I LOVE my home state and the fact that I’m the seventh generation to grow up on the family farm. My love of the Appalachian Mountains informs my writing. I want you to be as wild about these hazy, blue mountains and the wonderful people who live in them as I am.I’ve been married for eighteen years and I not only love my husband, I really, really like him. We started our journey together with three big dogs–Crockett, Precious and Sammy. We now have one small dog that requires more energy than the first three did together.
book review historical fiction historical romance netgalley Sarah Loudin Thomas