Review of "The Amish Blacksmith"

Review of The Amish Blacksmith 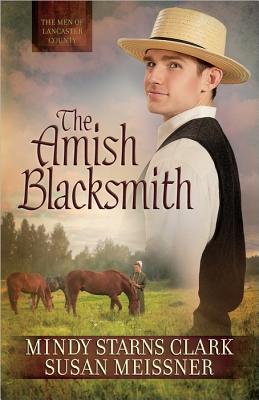 New from bestselling authors Mindy Starns Clark and Susan Meissner, The Amish Blacksmith (Book 2 in The Men of Lancaster County series) explores the men of an Amish community in Lancaster County, how their Amish beliefs play out in their unique roles, and the women who change their lives.Apprenticed blacksmith Jake Miller is skeptical of Priscilla Kinsinger's innate ability to soothe troubled horses, especially when he has own ideas on how to calm them. Six years earlier, Priscilla's mother died in an awful accident at home, and Priscilla's grief over losing her mother was so intense that she was sent to live with relatives in Ohio. She has just returned to Lancaster County. Not that her homecoming matters to Jake, who is interested in courting lighthearted Amanda Shetler. But Jake's boss is Priscilla's uncle, and when the man asks Jake to help his niece reconnect with community life, he has no choice but to do just that. Surprisingly, he finds himself slowly drawn to the beautiful but emotionally wounded Priscilla.Jake then determines to prove to her that it's not her fault her mother died, but what he discovers will challenge everything they both believe about the depth of love and the breadth of forgiveness.

MY REVIEW:  I am a huge fan of Mindy Starns Clark's books and Susan Meissner is a new author to me but the authors did not leave me feeling blue.   I quickly became caught up in Priscilla and Jake's story and I was rooting for Priscilla to open up and make friends with Jake and Amanda and the other Amish members of the community.  When Jake began to fall for Priscilla, I was silently begging her to open up and return his love.   I won't spoil the story for other readers however.  Readers will have to find out for themselves how the conflict is resolved.  5 Stars!  This book is a real winner!
I received a free pdf version of this book from netgalley and the publisher in exchange for my honest review.

A former singer and stand-up comedian, Mindy lives with her husband and two teenage daughters near Valley Forge, PA. She enjoys speaking to churches, civic groups, and libraries across the country. Her unique blend of humor and insight make her an audience favorite.

Susan Meissner was born in San Diego, California, the second of three. She spent her childhood in just two houses.Her first writings are a laughable collection of oddly worded poems and predictable stories she wrote when she was eight.She attended Point Loma College in San Diego, and married her husband, Bob, who is now an associate pastor and a chaplain in the Air Force Reserves, in 1980. When she is not working on a new novel, she is directing the small groups ministries at The Church at Rancho Bernardo. She also enjoy teaching workshops on writing and dream-following, spending time with  family, music, reading great books, and traveling.
Amish fiction Amish romance book review Mindy Starns Clark netgalley Susan Meissner