"I, KARENNA ELIZABETH Ashe, being of sound mind, do… But that’s it, isn’t it? Being here proves I am not of sound mind…”
So begins Book 1 of the Pride’s Children trilogy: Kary immediately regrets the misplaced sense of noblesse oblige which compels her to appear, live on national television—at exorbitant personal cost.
What she cannot anticipate is an entanglement with Hollywood that may destroy her carefully-constructed solitudinarian life.
A contemporary mainstream love story, in the epic tradition of Jane Eyre, and Dorothy L. Sayers’ four-novel bond between Lord Peter Wimsey and Harriet Vane, Pride’s Children starts with a very public chance encounter, and will eventually stretch over three separate continents. 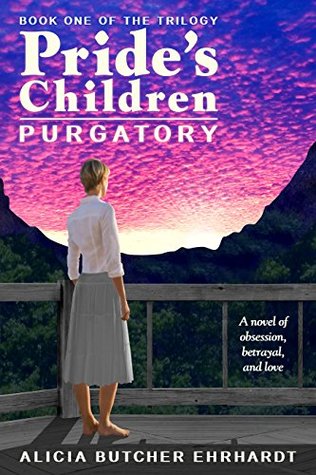 I could not get into this book and did not particularly enjoy it.  Too much seemed to be going on and I was having difficulty following the plot.
I received a free digital copy of this book from netgalley and Trilka Press in exchange for my honest review.  I was not required to write a positive review and all opinions expressed are my own.

Alicia Butcher Ehrhardt is hard at work on the next novel in the Pride's Children trilogy, working title NETHERWORLD, scheduled for publication later this year.

Follow her on Amazon or at PridesChildren.com to be informed when her next story is available.

As a writer, she’s published traditionally in short story. She's been featured on Wattpad, where her story Too Late has received 66K reads, and where her debut novel Pride's Children: PURGATORY was serialized and currently has over 20K reads.

A voracious reader since beginning to read at three, she had always intended to write fiction, and, now retired, dedicates her whole life - when not spending time with her husband, family, and chinchilla - to exploring the concepts of integrity in relationships, and the psychological questions of why people do what they do and make the choices they make, including their life partners.

She has devoted the past twenty-some years to learning to write to the standards of the early classics she was steeped in, as she believes that messages in fiction must be surrounded by the utmost in quality entertainment, and that fiction is the most powerful tool we have for slipping through the barriers we put up around our hearts and our minds.

A homeschooler by accident when illness derailed her working life’s plan, her career-long commitment to the sciences aided in the development of three tech-oriented children with a love of language.

She is a former researcher and computational physicist at the Princeton Plasma Physics Laboratory and the Johns Hopkins U. Applied Physics Laboratory. She holds a BS in physics from Seattle U., and an MS and PhD in Nuclear Engineering from the U. Wisconsin-Madison. A minor problem with her right eye kept her from fulfilling her ambition as an astronaut.

When she's not writing, you can find her enjoying the hummingbirds in her garden of perennials designed for them, or singing.