Review of The Amish Clockmaker 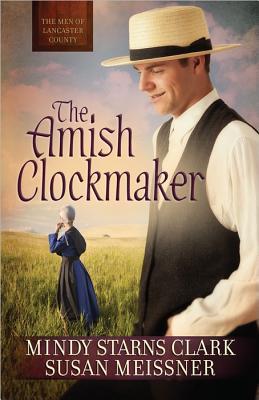 From bestselling authors Mindy Starns Clark and Susan Meissner, The Amish Clockmaker (Book 3 in the Men of Lancaster County series) explores the men of an Amish community in Lancaster County, how their Amish beliefs play out in their unique roles, and the women who change their lives.

Newlywed Matthew Zook is expanding his family's tack and feed store when a surprising property dispute puts the remodel on hold--and raises new questions about the location's mysterious past.

Decades earlier, the same building housed a clock shop run by a young Amish clockmaker named Clayton Raber. Known for his hot temper, Clayton was arrested for the murder of his beloved wife, a crime almost everyone--including his own family members--believed he'd committed, even after charges were dropped. Isolated and feeling condemned by all, Clayton eventually broke from the church, left Lancaster County, and was never heard from again.

Now the only way Matthew can solve the boundary issue and save his family's business is to track down the clockmaker. But does this put Matthew on the trail of a murderer?

A timeless novel of truth, commitment, and the power of enduring love, where secrets of the past give way to hope for the future.

MY REVIEW:  Accused of murdering the woman he loves and then abandoned by his Amish community and family, Clayton Raber leaves the home he grew up in and never returns.   Now 60 years later, Matthew's livelihood depends on getting Clayton's signature.  Can he find him in time?  Will Matthew discover even more information than he was seeking as he searches for Clayton Raber?
I have read many Amish fictions and many have similar storylines, but this book is very different.  I think it is the first time I have seen one with such a unique conflict.  I love the element of mystery and suspense as Matthew searches for Clayton Raber.   This book was a beautiful testament to love and commitment.   Thank you, Mindy and Susan, for writing a book deserving of a huge prize!   I hope this book will win some sort of honor.  5 Stars....read this....you will not be disappointed.
I received a free kindle version of this book from netgalley in exchange for my honest review.

A former singer and stand-up comedian, Mindy lives with her husband and two teenage daughters near Valley Forge, PA. She enjoys speaking to churches, civic groups, and libraries across the country. Her unique blend of humor and insight make her an audience favorite.

Susan Meissner was born in San Diego, California, the second of three. She spent her childhood in just two houses.Her first writings are a laughable collection of oddly worded poems and predictable stories she wrote when she was eight.She attended Point Loma College in San Diego, and married her husband, Bob, who is now an associate pastor and a chaplain in the Air Force Reserves, in 1980. When she is not working on a new novel, she is directing the small groups ministries at The Church at Rancho Bernardo. She also enjoy teaching workshops on writing and dream-following, spending time with my family, music, reading great books, and traveling.
Amish fiction Amish romance book review Mindy Starns Clark netgalley Susan Meissner