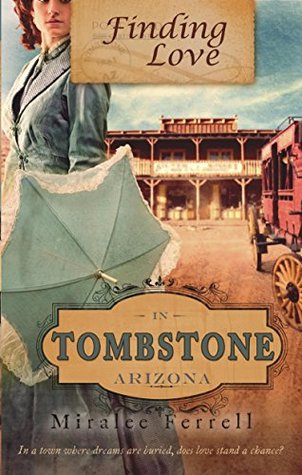 First published as Love Finds You in Tombstone, Arizona Love and second chances aren't easy to come by in a town named Tombstone. When Christy Grey receives an urgent summons to Tombstone, Arizona, she reluctantly leaves her new life in California. The trip goes from bad to worse when four masked men hold up Christy’s stage. She finally arrives in Tombstone to find her mother ill and her brother trapped in a life of gambling. Desperate for money to support her family, will Christy bow to pressure from the local saloon owners and return to the life she thought she’d given up for good? Nevada King has problems of his own. He's been dodging bullets for years and wants nothing more than to settle down and get married. But he's on the run from outlaws bent on revenge, and the one woman who captures his interest recognizes him from the stagecoach holdup. Will Christy turn Nevada in to the authorities, or will the outlaws on his trail catch him first?

REVIEW:   Westerns are not my "cup of tea" and I don't normally find myself wishing for the hero to kill the outlaw as I read, but THIS western-themed historical romance is certainly my "cup of tea" and YES, I was desperately hoping the hero would kill the outlaw!  This book read like one of my favorite action movies and I found myself feeling like I was on an exhilarating roller coaster.  This book is exciting, fast-paced, and I love that it is based on an actual town and many true facts were incorporated into the plot.   5 stars for this amazing piece of work!
I received a free pdf version of this book from the author in exchange for my honest review.

Miralee Ferrell and her husband, Allen, live on eleven acres in the beautiful Columbia River Gorge in southern Washington State, where they love to garden, play with their dogs, take walks, and go sailing. She is also able to combine two other passions—horseback riding and spending time with her grown children—since her married daughter lives nearby, and they often ride together on the wooded trails near their home. Ironically, Miralee, now the author of eight books, with many more on the way, never had a burning desire to write—at least more than her own memoirs for her children. So she was shocked when God called her to start writing after she turned fifty. To Miralee, writing is a ministry that she hopes will impact hearts, and she anticipates how God will use each of her books to bless and change lives.
book review Christian fiction historical fiction historical romance Miralee Ferrell

thanks for commenting! I love to hear from my friends and followers! Comments will be posted after approval due to the many spammers :(