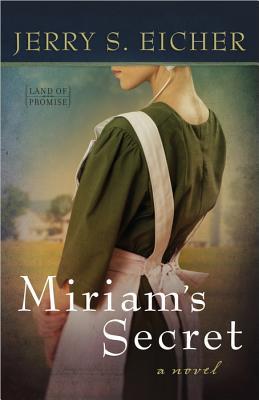 Bestselling author Jerry S. Eicher (more than 600,000 books sold) brings new characters and surprising challenges to lovers of Amish fiction in the Land of Promise series.In this first book, Miriam Yoder has a secret. Her compassionate care for Amos Bland during his last days resulted in her receiving a large inheritance. When Ivan Mast indicates his intentions at romance, Miriam suspects he's discovered her hidden wealth and has plans that aren't inspired by his love for her.Seeking a fresh start where no one knows her, Miriam accepts a teaching position in faraway Oklahoma where she meets Wayne Yutzy, a local greenhouse employee. His interest in her seems genuine and when he proposes, Miriam accepts. Happiness surely awaits the newly engaged couple....or does it?Book one in the Land of Promise series

MY REVIEW:  I discovered Jerry S. Eicher's Amish fiction several years ago and his books never disappoint me but they do always surprise me.  Jerry does not write the typical Amish fiction.    This one is no different as Miriam inherits a HUGE fortune along with the family farm from Mr. Bland, the elderly gentleman she had been caring for in his home.   She tells others about the farm but keeps a secret of the even greater fortune she has inherited.  When she decides to leave town and go to Oklahoma and visit with her Aunt and Uncle to be the helper when she has their first baby, she takes wayward sister, Shirley. along with her.   Shirley has been dating an Englisch boy and promises her parents to give him up but doesn't.   Miriam thinks going far away for a while may help both of them.  I really like Miriam,  she is mature and independent.   Generally the Amish fathers make all the decisions but she is the one to suggest they go away.   It must have been a scary decision to leave all that one knows and travel clear across the country to the great unknown.  I have great admiration for Miriam.   Living in Oklahoma brings with it new excitement for Miriam and she loves living there.  She falls in love and begins teaching in the Amish one-room school.   Shirley is still immature and does not seem to find her happiness so easily.  I love the surprises that Jerry Eicher brings to this book and I won't spoil the story for the reader by revealing too much.   I have always fantasized myself about just running off somewhere unknown and experiencing life, but that has not happened for me so I was able to live vicariously through Miriam.
I rate this book 5 stars and highly recommend it to readers.   This is book one in the Land of Promise Series and I am very excitedly anticipating the other two books in the series.
I received a pdf version of this book from netgalley and the publishers, Harvest House, in exchange for my honest review.